The southern most tip of the United States, Big Island, Hawaii. Taken from our helicopter.

In early May, my husband and I traveled to Hawaii. We enjoyed exploring two islands of this “paradise” land. First, we went to Kona on the Big Island, and stayed at King’s Land resort for five days. The five pools were amazing, along with a hot tub. We watched young people perform at a luau our first night on the grassy lawn while we ate supper. This was not the traditional luau with the roasted pig and all the island foods, but it was a cultural introduction to Hawaii’s past and current beliefs and values. The atmosphere was laid back, and warm. 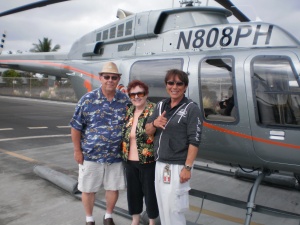 Posing with our pilot, Kogi, after landing.

island. We reserved the traditional luau for Mother’s Day, and a tour on the Atlantis, a submarine ride, for Monday. We ended up reserving a helicopter ride for that same day, so we went from 105 feet below the ocean for almost an hour, to the skies over the entire island for the next 2 1/2 hours. The volcano was impressive! Our pilot was a native to the island, and sought out places in the volcano where the boiling lava appeared below us. He showed us the Kona coffee plantations, the macadamia nut farms, the rain forest, the snow-capped mountains in the north, and magnificent waterfalls. On the eastern coast, a full-circle rainbow appeared near this huge waterfall, and it seemed to follow us up the coast for a while.

My husband and I rented a car when we arrived, so we drove to 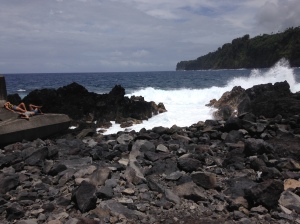 parts of the island to view the ocean scenery from the land. We also discovered a railroad museum, and a lighthouse. During the chopper ride, Kogi, our pilot, showed us other lighthouses around the island. People on the island were friendly and willing to share knowledge about their islands. They reminded us of Iowans, in that way. We traveled to the Big Island Cookie Factory. They actually have a glass closed-in plant where workers make and package these countless varieties of candies and cookies, and then a floor room where you sample and buy the boxed desserts.

As guests at King’s Land resort, we had access to Waikaloa Village Resort. It was huge with swimming pools and beaches, an island tram and boat that took us around the resort, waterfalls, a dolphin watch area, a snorkeling, area, lots of food stands, and much, much more. 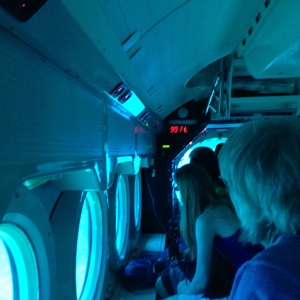 Inside the submarine. Note the depth sign at 99 feet!

We flew to Honolulu airport after five nights, and stayed at the Waikiki Hawaiian Resort. I finally stepped into the Pacific Ocean, something I always wanted to do. Between the nine towers of hotels, and at least seven pools, and beach, water surrounded us. Tons of food stands and restaurants, shops, and entertainment filled this resort. Owen and I toured Pearl Harbor Museum with the USS Arizona Memorial, and the USS Missouri – somber and impressive activities. Though we loved our time on the islands, we felt ready for home.

The USS Missouri – the Mighty MO

I wondered as I viewed these islands and their beauty, how would they compare to heaven. When the Lord removes the curse from humanity and the earth, and renews the world after His final return, would any of these places like Hawaii, the Grand canyon, Niagara Falls, etc. reappear on the new earth? Whatever, the Lord does will be amazing!

Have you ever traveled to a place of beauty and wonder? Please share with me your experiences. Thank you for visiting my website, thehopebeacon.wordpress.com, and reading my posts!

Ready to tour the Big Island via helicopter!

Wecome to my blog! I am a Christian wife, mother, and grandmother who wants to share my lifetime experiences with those who share the same interests and roles. I served as an educator for twenty-one years as both a classroom teacher and an Instructional Services Consultant. Most recently I chose to write children's books. This new path as an author led me to create this website. I seek to inspire, uplift, encourage, and advise those who come here who share common interests or life experiences as myself.
View all posts by thehopebeacon →
This entry was posted in This and That and tagged friendly people, grave, Hawaii, King's Land, luau, memorial. rainbow, Oahu, paradise, Pearl Harbor Museum, submarine, USS Arizona, USS Missouri, Waikaloa Resort, Waikiki. Bookmark the permalink.